Facts Should Know Before you go

Terracotta Army Museum, which is also a UNESCO World Heritage Site, is located in the Lintong District, Xi’an, China. The army sculptures were meant to protect the first Emperor of China, named Qin Shi Huang, in his afterlife after his burial.

The army was initially buried and forgotten for hundreds of years; until it was discovered in 1974 by farmers digging a well. The sculptures include sculptures of army generals, warriors, horses, and even chariots. Although the collection is known to depict an army, there are other figures as well, which include musicians, officials, strongmen, and even acrobats.

The soldiers and other sculptures buried with the Emperor are made of clay, but they are based on real warriors. In total, more than 8,000 soldiers were buried with the emperor to watch over him in his afterlife.

The Emperor rose to power when he was only 13 years old. After taking the throne, he ordered this project, which took nearly 40 years to complete. He ruled from 247 BC to 210 BC.

Seeing this ambitious collection of artworks is an experience most people will live to remember. Having been around for thousands of years, the Terrracotta army carries with it lots of history.

The museum offers a unique insight into how Chinese emperors were like, and how much they prepared for the afterlife. The collection should also help give you an insight into the brilliant and deep Chinese art culture.

The clay army has survived centuries of burial, looting and other challenges that have made it unlike any other collection of artworks in the world. That is partly why the museum was declared a UNESCO World Heritage Site. Some have called it the eighth wonder of the world.

Otherwise, the Terra Cotta Army Museum is also known as “Terra Cotta Warriors and Horses” can be accessed easily with a taxi or even a bus from Xian Railway Station.

What is the best timing to go?

Spring (March, April, and May) and autumn (September, October, and November) are very popular travel seasons. Enjoy the comfortable weather and see the beautiful scenery. Try to avoid the official Chinese holidays, such as Labor Day(May 1st-May 3rd) and National Day(October 1st-October 7th). Bear in mind that get out early to avoid the crowds. There are too many tours after 10am, and the peak time for traveling is in the afternoon.

How to get to terracotta army museum by bus- know everything.

Xian travel plan will be incomplete without visiting Terracotta Army museum because it is the most popular tourist destination that you need to see but as you cannot go to the place on foot, you will need to find out how to get terracotta army museum by bus. As this place is far from the old city wall, opting for a bus service is the best option for you as Terracotta Warriors is located 50 km from Xian city center. Hence you can either take a rented car, taxi or join a tourist group for visiting the tourist attraction but car or taxi can be an expensive option.On the other hand, going with a local group tour can be a time consuming affair and hence you should go a bus if you want to save your valuable time and money.Majority of the tourists visiting Xian has no idea about the availability of public bus transport for travelling from Xian to Terracotta as they have apprehensions regarding using public transport, more so in an unknown territory.

Tourist shuttle bus for visiting Terracotta Warriors in Xian is considered as the best option for travelers as it offers convenience and ease of travel as it helps in saving time as it reaches the Terracotta Army within one hour as the buses uses expressway that makes the trip short and quick. Tourism bus no.5 is the special bus line for going to Terracotta warriors that is also called as the Bus No 306. Locating this bus is very easy as you will need to look for 5 number bus stop sign along with number 306 printed in smaller letters which means you will have to look for bus line number 5(306) which is the original bus that you need to travel in without being mistaken by fake bus line.

Finding the bus depot is very easy as it is the eastern square of the Xian railway station where you
will find the bus 5(306) at the east side or right side of the parking lot. You will also find the car park near the yellow buildings which has Chinese characters with English version on the wall known as china post.

Booking bus ticket is not required and you will only have to pay 7 Yuan in cash for the ride and the money will be collected after you are seated and ready for the trip which is scheduled at a regular interval of 10 minutes. But you will need to be alert during the ride as you will need to get down at destination C which is the terracotta Army museum as the bus last destination is 10 stops later which includes Qin Shihuangs Mausoleum and Huaqing Hotspring. But after visiting the museum, you will have to come to that parking lot from where you left for the trip without getting into any fake buses that are present for confusing the travelers. You can take the Terracotta warriors buses any day of the year as this museum is open 365 days a year and for further information about the fee, guide and entrance of the museum, you can look at the previous travel article. 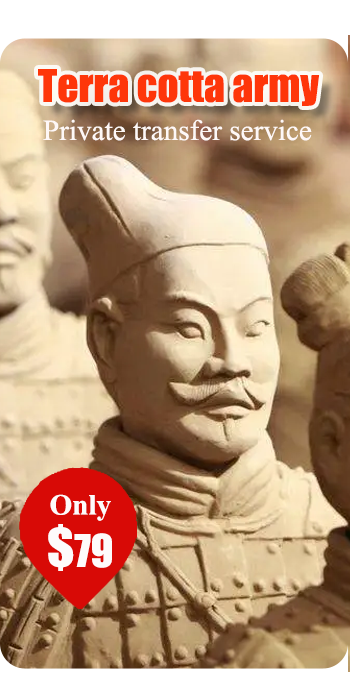